Skip to content
Xavier Geitz
Like many gamers in America, Xavier's introduction to the Fire Emblem series came by Marth and Roy's inclusion in Super Smash Bros. Melee. As a Marth main, he felt compelled to try out the source material. He did so by playing Fire Emblem: Blazing Blade. Fire Emblem quickly became his favorite tactical role-playing game franchise of all time. When he isn't writing about or playing Fire Emblem, you can find him playing The Lord of the Rings: The Third Age (The GBA version) and Onimusha Tactics.
Latest posts by Xavier Geitz (see all)

When you think of monks in video games, you think of bald guys in brown robes that are good at martial arts. That’s not how they work in Fire Emblem.

Think of monks in Fire Emblem as sort of like the magical equivalent of John Wick. The villains of their worlds grind their gears, smush their flower beds, and shatter their stain-glassed windows. Fire Emblem’s monks aren’t satisfied with simply punching someone in the face. They instead channel their inner Cole MacGrath and start smiting their foes with bolts of lightning. That’s one way of going about it, I suppose.

Out of the three forms of magic in Fire Emblem, Light magic was the only one without an offensive base class. That changed with the introduction of the Monk. How does the Monk stack up against the Mage and Shaman, base Anima and Dark magic classes, respectively? Let’s find out.

History of the Monk 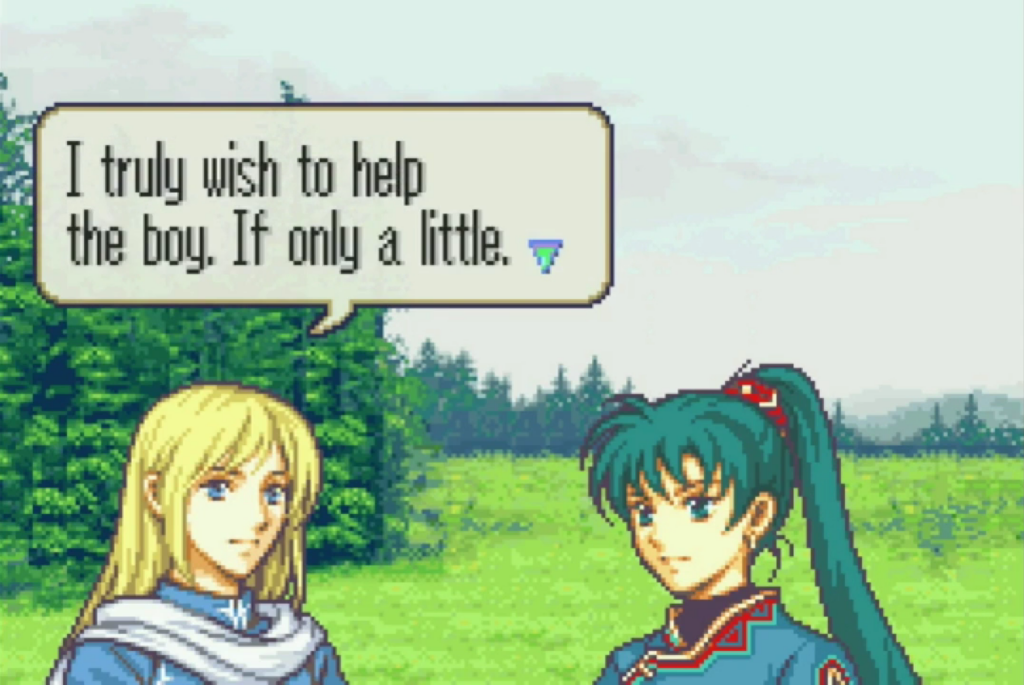 The Monk is a more modern-day class, first introduced in The Blazing Blade. Lucius serves as the first Monk in the series and uses Light magic. Monks share the Bishop promotion with Clerics and Priests, the other two religious-themed classes in the series. 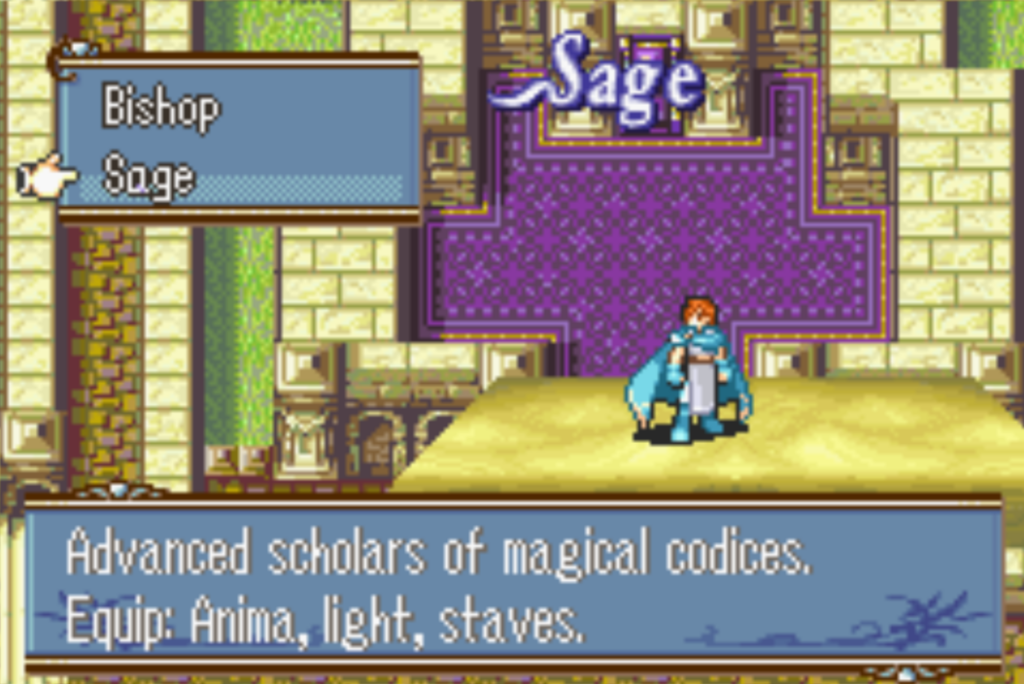 The Monk class returned in The Sacred Stones by way of Artur. The Sacred Stones featured branching promotions, and alongside the Bishop, Artur has the option of promoting into a Sage. Seeing how Monks didn’t yet exist, the class is not present in any of the remakes of the first three games. It also isn’t present in the Tellius Saga games or Awakening. 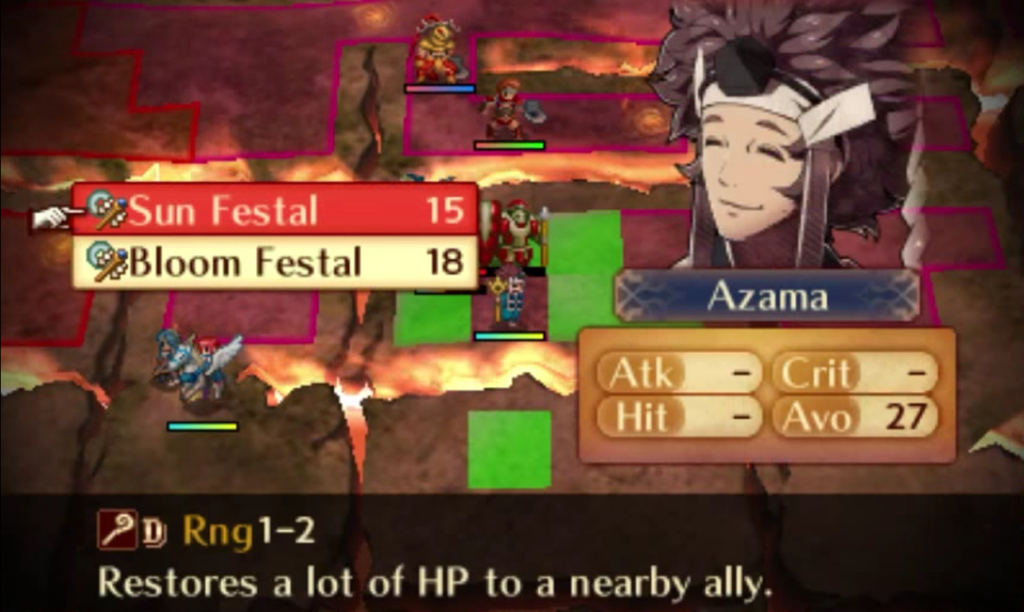 After an 11-year hiatus, the Monk class returned in Fire Emblem Fates. Technically. Unfortunately, the Monk in Fates is merely the Hoshido equivalent of the Priest class renamed. You can tell because Monks use Staves instead of Light magic tomes.

The Monk class received something of a return to form in Three Houses, ditching the Staves and using Faith and Reason magic instead. Unfortunately, the Monk is just a Beginner class in Three Houses and no longer the Light magic equivalent of Mages and Shamans/Dark Mages. Instead, Monks can promote to Mages, Dark Mages, or Priests. Any unit that’s level 5 and has a Beginner Seal can become a Monk.

What Makes A Monk? 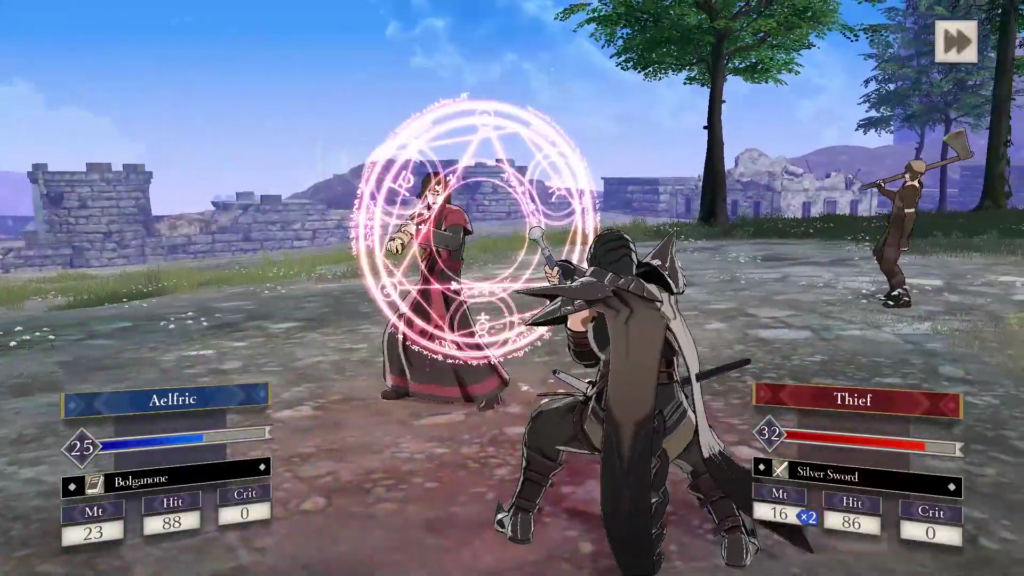 Monk is a private detective and consultant for the police known for his extreme case of OCD and multiple phobias that make him a very quirky person. 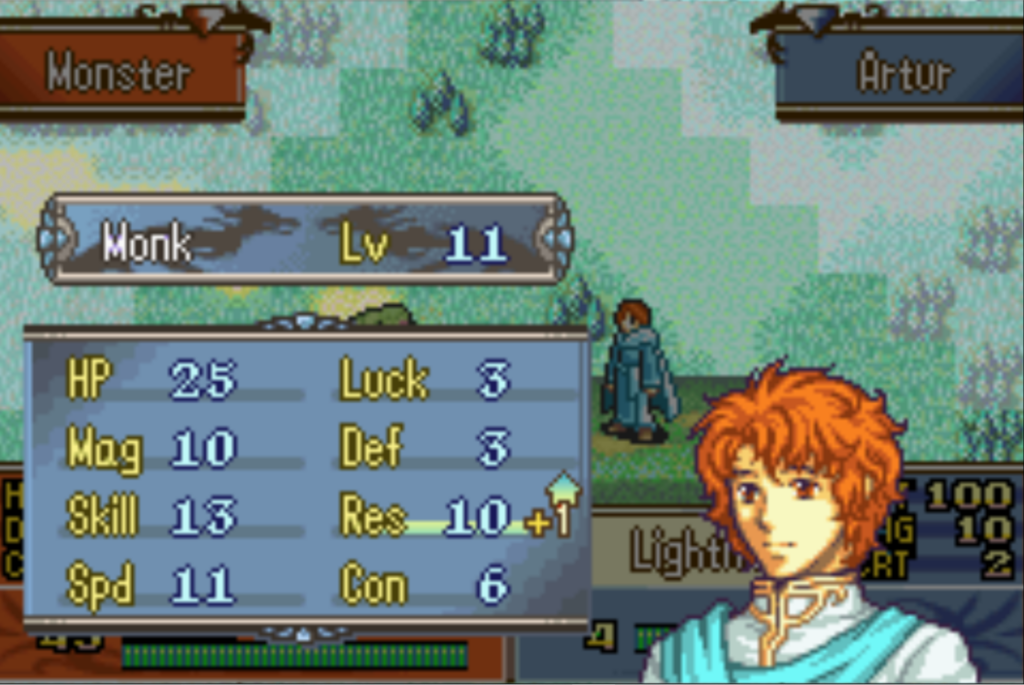 Fire Emblem’s Monk (Not including the version in Fates) is primarily an offensive-oriented Light magic class. Monks have high Magic and Resistance, above-average Speed and Skill, and poor HP, Defense, and Luck. 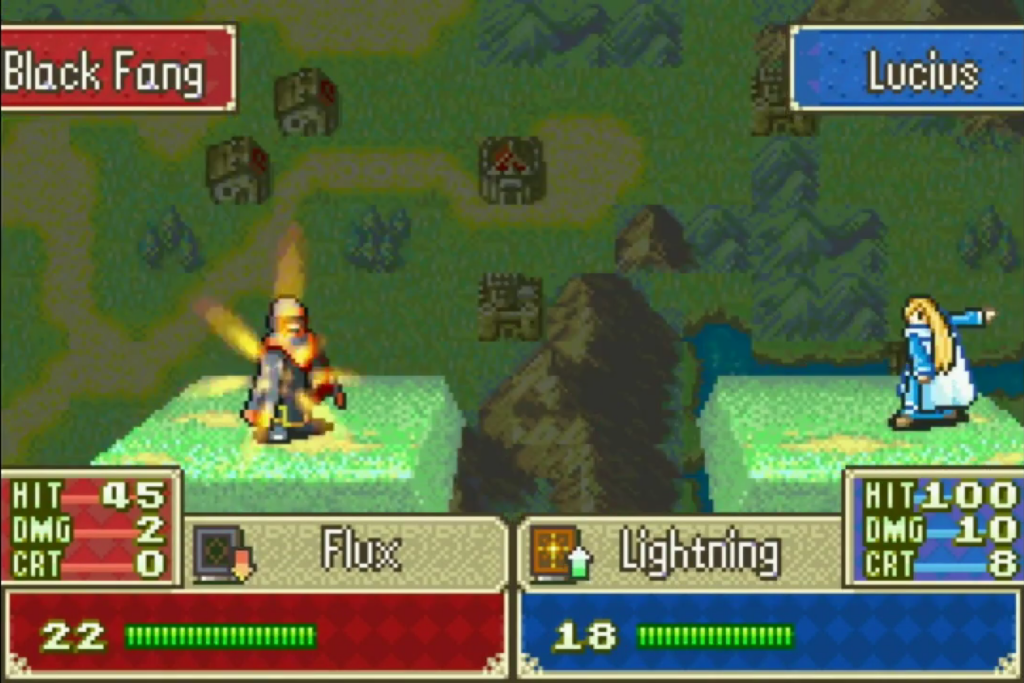 The thing that Monks have going for them the most is accuracy. With Light magic being the magical equivalent of Swords, Light tomes are very accurate. That makes Monks quite useful as boss killers (Or at least boss chippers) who have hefty Avoid bonuses from being on a gate or throne. As enemy Resistance levels are pitiful in the early game, Monks will have no problem mowing down your enemies. Unless you get Speed screwed during level-ups, they should be able to double after leveling up a couple of times and one round everything, except enemy Mages and possible Knights (Due to having larger HP pools). As you would expect from a magical class, Monks excel at having high Resistance. Even against Anima users, Monks will barely take damage from enemy magic attacks. If you need them to distract an enemy Mage so one of your physical units can safely go in for the kill, Monks will do well at that job.

Generally, your Monk will have Speed on the higher side, but there’s a problem in the GBA era that prevents them from being especially fast; the weight of Light magic tomes. Despite being the magical equivalent of Swords, Light magic tomes are ironically quite heavy in The Blazing Blade and The Sacred Stones. Using any Light magic tome past Shine will cause significant Speed penalties, putting your Monk at risk of being doubled by the fastest enemy types. 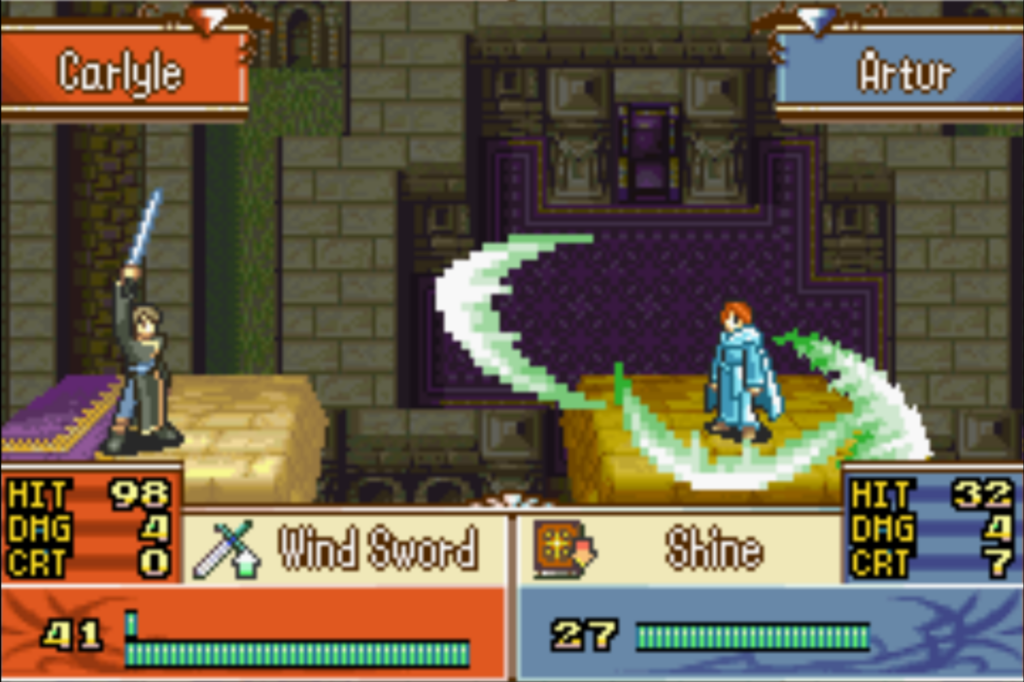 Another issue with Monks is their weapon of choice. Light magic is easily the weakest form of magic in the series. It is also at a disadvantage against Anima magic, the most common form of magic in the series. Swords do far better against Lances than Light does against Anima. Your damage against Mages will be pretty pitiful most of the time. While not necessarily a con, Monks rarely have time to be extra effective against opponents because Dark magic users are generally quite rare as enemies. Coupled with their lower damage output, it makes Mages stiff competition for deciding on what magical unit to field.

Monks have low base HP and shaky HP growth rates, so giving them an Angelic Robe isn’t a half-bad idea. Their Defense stats and growth rates are atrocious, and their Luck is even worse. They are very vulnerable to critical hits, and you need to keep them away from units like Myrmidons, Swordmasters, and Berserkers at all costs. They lack the Speed and Luck necessary to be dodge tanks and should always have guards around them. 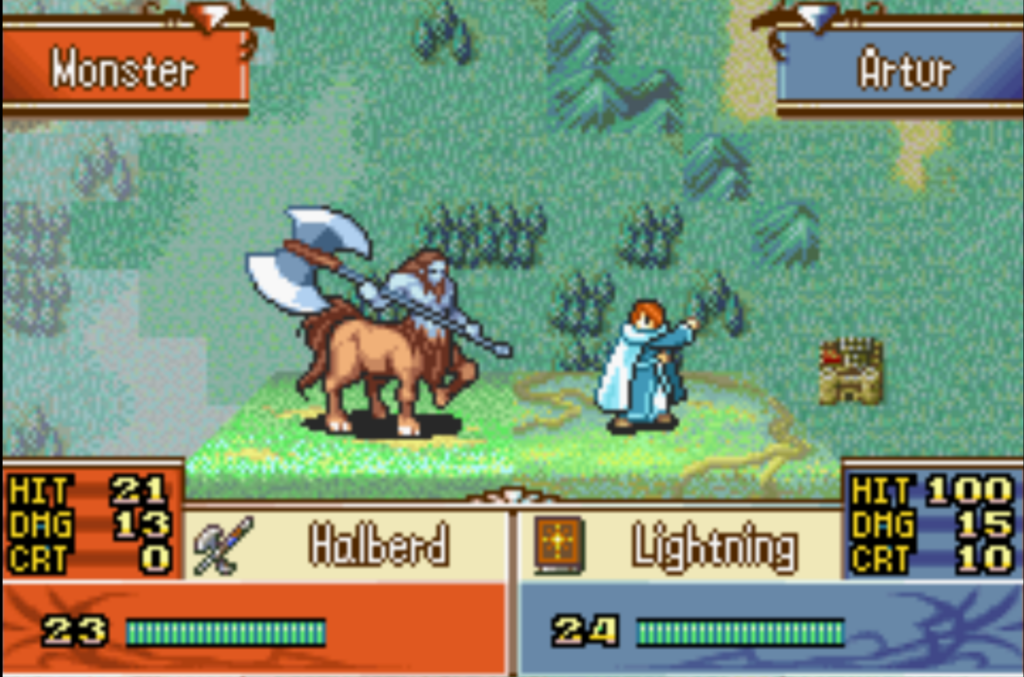 What stands out the most about Monks is their Staff rank after becoming Bishops. When Mages become Sages and Shamans become Druids, they get a pitiful E rank in Staves. You ideally want your Staff users to at least have a C rank, and getting from E to C will take an excessive amount of grinding. 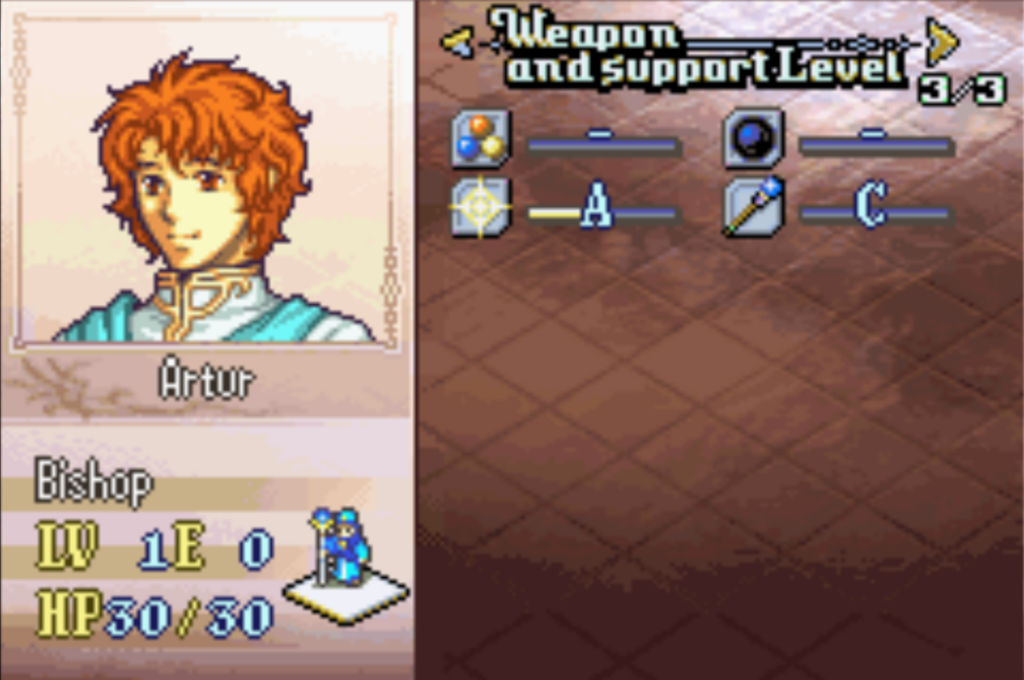 But not if you’re a Monk. Because if you’re a Monk, you start with a C rank in Staves. Extra Heal Staff users are all well and good, but to get the most out of Staves, you need a high Staff rank. And that’s something promoted Sages and Druids likely never will achieve. Monks won’t have that problem. And unlike Priests/Clerics who become Bishops, your promoted Monk will have a high rank in Light magic and have access to the strongest tomes in the game.

Sure, Monks will never be your hardest magical hitter, but they will do good damage against most physical units in the game and be very competent Staff users.

How Many Playable Monks Exist In Fire Emblem?

Since the Monk class isn’t one that Intelligent Systems ever fully committed to, we barely have any playable Monks. There have been four so far, with one of them technically not counting as he’s just a renamed Priest.

Who Is The Best Monk In Fire Emblem? 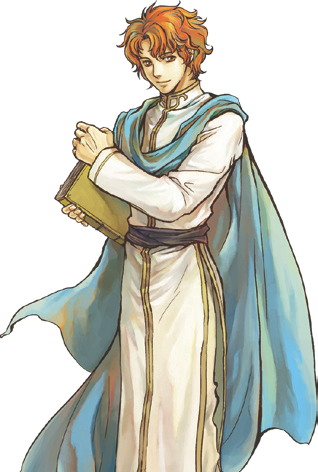 I would say Artur from The Sacred Stones. Some might say it’s unfair that I’m counting what Artur can do after he promotes, but I can’t help it. Slayer is probably the best skill in The Sacred Stones, and he will be better offensively than the Priests/Clerics in the game.

The enemies in The Sacred Stones are also some of the weakest in the series, and Artur will be very dominant for the entire game (Except against Anima users).

Is The Monk Class Good?

When speaking of the Monk class, I mainly focus on the Monks from The Blazing Blade and The Sacred Stones. Fire Emblem Fates doesn’t count, and the Monk is just a beginner class in Three Houses.

In the GBA era, I would say that yes, Monks are a good class. They aren’t better than Mages due to the poor trinity of magic matchups and heavy tomes, but they can still hold their own. After promotion, I would argue that promoted Monks are the most well-rounded magical class in the GBA era.

I will admit that Monks can face some stiff competition with Guiding Rings, so promoting them may not be everyone’s priority. Some will argue that giving your S rank Staff user access to Light magic is more important than your S rank Light magic user having access to Staves. If you want the best magic damage dealer, you’ll be better off promoting a Mage or a Shaman over a Monk. But overall, Monks have a lot of value, especially in The Sacred Stones, and are units well worth their investment.

Question: Which class is better, Monks or Priests/Clerics?

Answer: Probably Priests/Clerics. You always get a Mage in the early game if it’s a magic damage dealer you want, and they’re better at that job than Monks. A high-level Staff user is something that you need ASAP, and that’ll probably be a Priest/Cleric.

Question: What’s the best Light magic tome for Monks to use?

Question: Is it worth staying in the Monk class in Three Houses?

Answer: Absolutely not. Since it’s just a beginner class, there’s no reason not to promote your unit as soon as the option is available.

I must say that I am pretty disappointed that Intelligent Systems didn’t stick with the Monk class over the years. With the added focus on giving classes skills in recent releases, I would’ve liked to see what they would’ve done with Monks in the various games where they are absent.

I really liked the Monk’s inclusion and giving players an offensive option for every form of magic. I suppose you could argue that thematically, it makes more sense for the more religious-based Light magic to be a last resort. With that line of thinking, it makes sense for Light magic users to start as strictly Staff bots before using Light magic to attack enemies.

But still, there’s no harm in holding onto hope that Monks get some love in future installments. A lot depends on how much stuff from Three Houses sticks around for the next game in the series. I’m one of those Fire Emblem fans that find the GBA to be peak Fire Emblem, and Three Houses is honestly a little unnecessarily convoluted, in my opinion. I would love to see them dial it back a little bit. And yes, bring back Monks and Light magic. Monks never really got a chance to shine in the series, and that’s a shame.