Ethan Mojica
Ethan's first contact with the FE saga was with a Super Nintendo emulator that his father had installed on his PC. The ROM in question? Genealogy of a Holy War. After that, He remembers the first Fire Emblem game he managed to complete was The blazing Blade on a GBA emulator for android and his favorite character of the whole saga is Seliph. Outside of FE, Ethan is a keen indie gaming fan and loves reviewing games when he gets the chance!

One of the things that have changed the most over the years within the Fire emblem characters is the number of characters and the characteristics of these characters. It’s not just that all the characters are different. Each installment has different classes, characters, and overall a unique environment.

Fire Emblem Fates is one of the most unique and different games of the whole saga (this is a good thing, but some fans didn’t like it too much). Today, we will talk about one of those things that make Fire Emblem Fates unique: Felicia.

From his unique and completely different design to the fact that the game he appears in is exceptional in all its mechanics. Today, I will talk about Felicia and how you can make her the best character in Fire Emblem Fates. If you choose Corrin Male, Felicia is one of the first units in the game, no matter which version you choose. She is the maid in charge of supporting Corrin, and the role she will play is going to be more of a mixed unit. What do I mean by this? Well, it’s not really an attack unit, but neither is it a defense unit or a healing unit.

Also, in my own experience, although she starts slow and there may be better units, as you improve the game, level up. So on, Felicia can become a devastating unit. Believe me, in my case, it allowed me to turn my game of Conquest into a walk in the park. 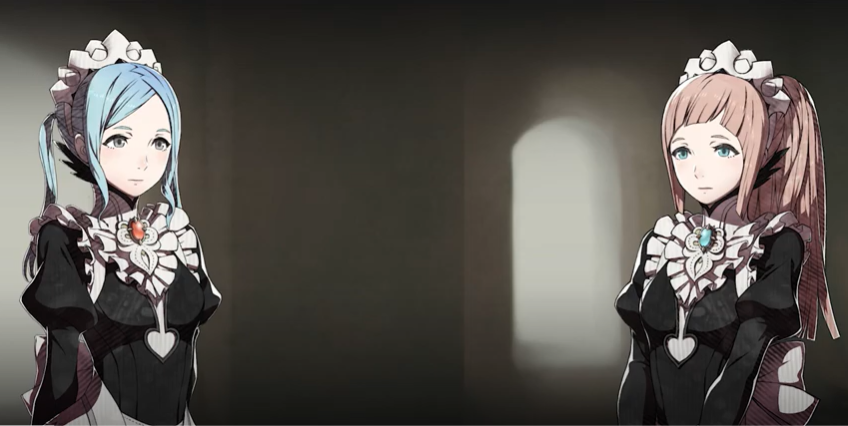 One of the most exciting things about Felicia is her backstory. I can’t really share much of her backstory because, basically speaking, it would be spoilers for the game. Still, I will try to tell you enough so that you will understand why Felicia is one of the best characters in the game.

Felicia is Flora’s younger sister and the youngest daughter of the elder chief of the ice tribe. Despite Felicia’s maid-like appearance, Felicia is actually a princess. However, she was kidnapped by the Nohr royalty to prevent a violent insurrection and was assigned to take care of Corrin.

She has never been separated from him, accompanying him even at the moment when he has to decide whether to ally himself with the kingdom of Hoshido or with Nohr. No matter what decision Corrin makes, she will follow him.

I can’t really tell the rest of Felicia’s story because it is a fundamental part of the game. However, you will get attached to her. Not only because she’s an amusing character, but in general, she’s just too lovable. On top of that, she’s a hilarious character who will always give you a lot of laughs with the things she says. One of Felicia’s characteristics is that she can’t cook, but she’s always trying for some reason. It’s a running joke that her food almost always intoxicates the characters, and I honestly find it hilarious.

Felicia is worthy of becoming one of your best units, just for her story alone.

Why should I play with Felicia? 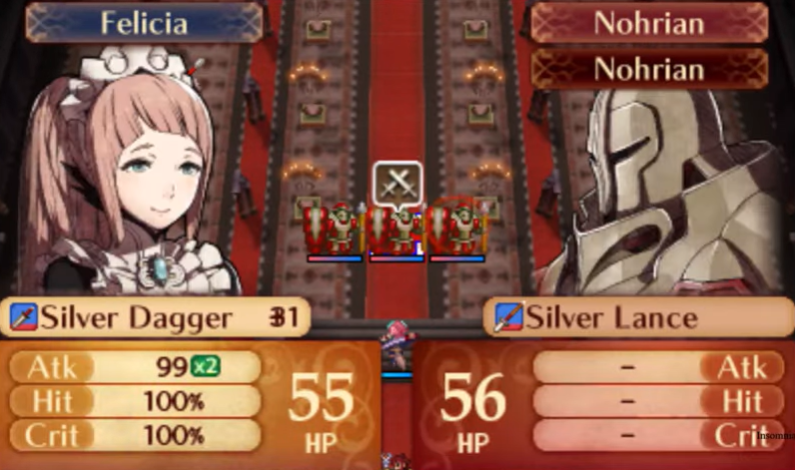 But don’t think this is just about choosing Felicia because of her personality. Not at all. Felicia is actually one of the best units in the game. She is a character capable of dealing with most enemy units at the beginning of the game. As I mentioned before, in the beginning, it seems that she is the typical filler unit that is not really good at attacking, healing, or defending. But the reality is that Felicia has excellent hidden potential. And that is related to her class: Maid.

Maid is one of the unique units in Fire Emblem Fates, the female counterpart of the butler unit. It is a class that has mixed considerations. It allows you to attack with shurikens and heal with staff. This means that you can attack from a distance, poison, burn, and generally prepare devastating attacks, and at the same time heal your units with staff. Overall, it is a perfect unit if you are looking to be in balance at all times.

Despite this, Felicia is a somewhat chaotic unit. It scales a lot in luck and speed but not much in attack. You can correct this by equipping her with fire shurikens or Felicia’s plates. These weapons use the magic level to do the damage calculation.

But the best thing about Felicia is her use as Corrin’s companion. Felicia has a unit that is tailor-made for Corrin. With the demoiselle’s ability, she reduces the damage he receives. At the same time, with Devoted partner, Felicia increases Corrin’s damage by two points. She is generally the best partner for Corrin in the early game (and even in the end game).

In addition to that, she has a good support range which gives her access to a lot of alternative units: With Hana, Peri, and Flora, Felicia gains access to the Samurai, Knight, and Dark Mage classes. This gives her, even more play, especially in the physical attack. The rest of the relationships are simply fun stories that will allow you to better appreciate her personality.

How to Transform Felicia Into the Best Maid? 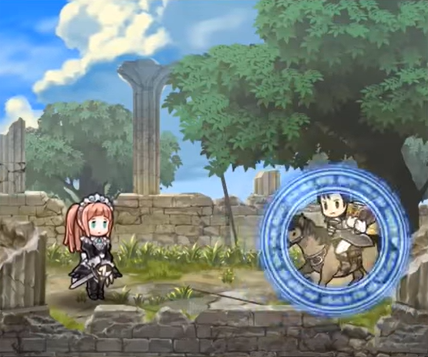 One of the problems you will encounter when leveling Felicia is that she doesn’t have an option to upgrade her to a higher class. Maid is the last level of the troubadour class, so there really isn’t a wide range of upgrades. However, what you can do to upgrade her is pair her with Corrin.

Personally, I don’t like the pairing of Corrin and Felicia. Not so much because of their performance on the battlefield (they actually have excellent stats, and the possible children of Corrin and Felicia always turn out to have outstanding characteristics). Still, I don’t like them much as a pair on a personal note. I’ve always found it odd that Felicia basically raised Corrin enough to marry them.

There is also the option to change the class to mercenary. Personally, I tried this skill line; I made Felicia’s a mercenary for more physical attacks. However, I didn’t really feel a connection with the class. Still, suppose you are looking for a more powerful attack and a higher level to play with an advantage. In that case, Felicia mercenary is a good option in general.

Another option is to convert her into a Hero, which allows getting a higher defense against axes due to her axe breaker ability. Axes are the most significant weakness Felicia has because, in the weapon triangle, shurikens are weak against them. In addition, she gains the “Sun” skill, so she has a more prominent offensive game.

A last exciting alternative is to turn her into a Witch with the witch mark. I tried to make use of this class. I found it interesting, but there are better options. It is excellent if you want to concentrate on magic attacks.

The Abilities of Felicia

Felicia has two base abilities:

How to Play Felicia Maid 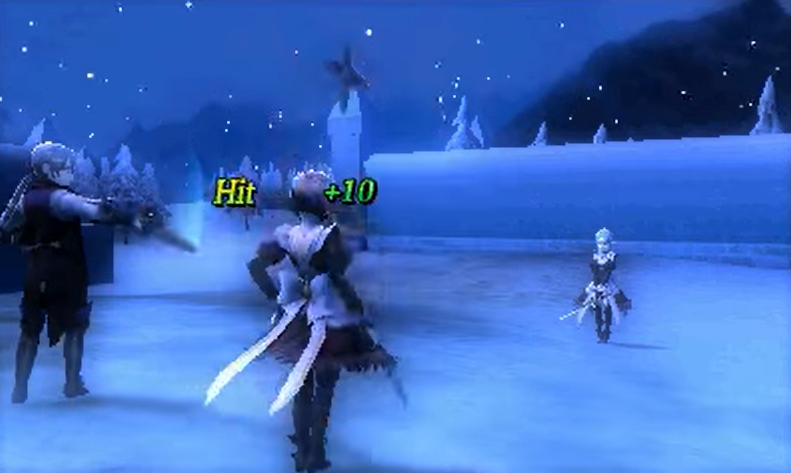 Felicia’s final build will look more or less like this:

The ideal is to use it as a character to tie eliminations. Preferably together with Corrin. You let her take care of weakening the enemies from a distance and then let some other units finish them off. It is a good option.

If you want to play Felicia solo, just be careful. Not because she is weak, but because she doesn’t have a good defense. She is capable enough to survive independently, but she can be weakened accidentally.

She is a character meant to be left in the middle of the battlefield, where she can be healing and at the same time attacking. Don’t leave Felicia in the back because she won’t be able to shine, but don’t leave her all the way in front either because she could be eliminated.

The Best Way to Level Up Felicia 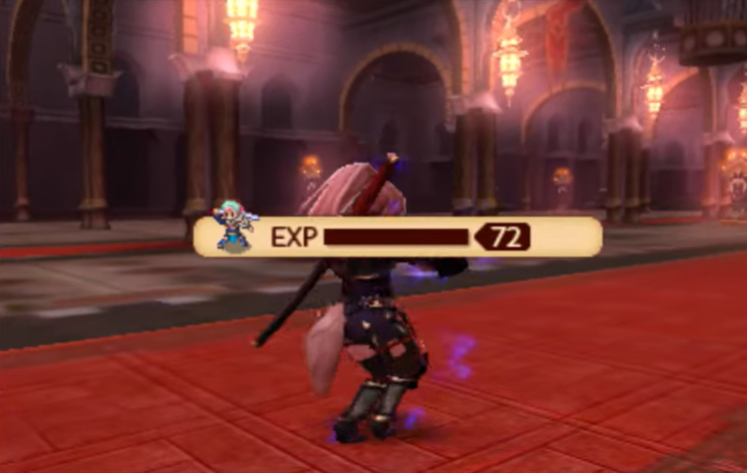 Just play with her. Really, there is no other way to level up Felicia. Since she has been a mixed attacker since the start of the game, she will level up pretty quickly once you start playing with her.

If you are a bit scared that she could be eliminated, the best option is to use a dual build with Corrin, Peri, or Hana. Corrin allows her abilities to shine, and Peri or Hana allows her to develop the physical part.

Question: Should I reclass Felicia?

Answer: That is a really personal decision. I usually just let Felicia be a maid. Reclassing her allows for a better attack build. However, you will lose a very nice mixed built that allows you to attack and heal simultaneously.

Question: Which Staff is Better for Felicia?

Answer: Mend or catharsis. Mostly because physic doesn’t have too many uses.

Question: Canonically, who is Felicia’s Husband?

Answer: She doesn’t have a canon husband.

Felicia is a box of surprises. At first glance, she seems like an ordinary and even annoying character. But the reality is that she is a fascinating character on a personality level and an attack level that allows you to play with her in multiple ways, both offensively and defensively.