Ethan Mojica
Ethan's first contact with the FE saga was with a Super Nintendo emulator that his father had installed on his PC. The ROM in question? Genealogy of a Holy War. After that, He remembers the first Fire Emblem game he managed to complete was The blazing Blade on a GBA emulator for android and his favorite character of the whole saga is Seliph. Outside of FE, Ethan is a keen indie gaming fan and loves reviewing games when he gets the chance!

Fire Emblem Three Houses is the latest game in the series. Like Awakening and Fates, it is a game that has dramatically emphasized terms of characters.

While there are characters that shine more than others, the reality is that they all represent a good part of the game in their own way. And the truth is that, although there are characters with greater narrative weight, they can all become fundamental pieces of your army at the end of the day.

Lorenz is one of those characters that really isn’t that good in terms of personality. Still, thanks to his abilities, he can become a crucial part of your Fire Emblem three houses game.

Actually, I don’t have a great connection with him. Even after having played all the routes on several occasions, he is not a character that is among my favorites. But he has excellent stats across the board, so why not give him a chance? Below, I’ll tell you more about how you can play Lorenz properly.

Important Information to Know about Lorenz

One of the first things that can be noticed concerning Lorenz (as with the rest of the characters in the game) is that he is a character that does not have a single skill that stands out. He is an overly neutral character meant to scale up to different classes once the appropriate skill tests are taken. Like most characters, he is meant to be a blank canvas.

Despite that, he has a natural affinity for spears and horses and reason skills. This can give you an idea of what class might be best suited for him.

The most exciting thing about him really is his backstory. But Lorenz isn’t even a good enemy outside of that. He’s just too bad a character (in my opinion). I sometimes forgot he was an important character and thought he was a generic NPC. 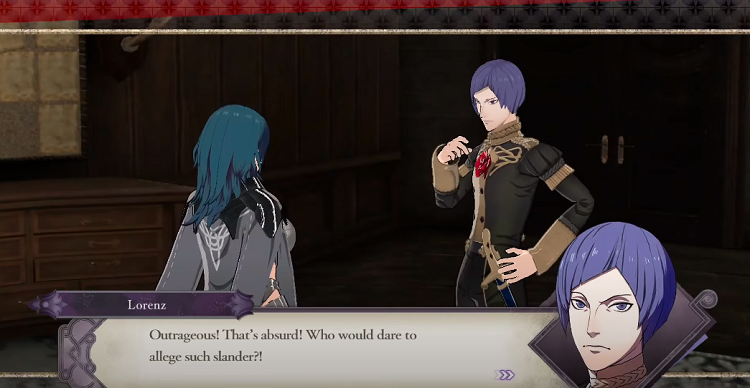 Lorenz is the eldest son of the count of Gloucester and was a participant in the western rebellion in 1178. After that, he entered the Garreg monastery in 1180, where he became part of the Golden Deer household.

The most important thing he does in that house is that he is too suspicious of Claude. Because he did not consider Claude a worthy successor of the house since he was basically an unknown, he will always look down on Claude most of the game. His main characteristic is his high ego and the fact that he is overconfident in himself.

The rest of Lorenz’s story is explored explicitly in the game, allowing you to learn more about him as you go up in affinity. But really, at least in my opinion, he is not as attractive as other members of his house, so he doesn’t really have that good of a backstory.

However, his house backstory is a little bit more interesting, so I will talk about that backstory in the next section.

Gloucester is one of the ten elites that fought alongside Nemesis against the church of Seiros, the four saints, and the Adrestian empire. One of the most curious things that Gloucester can be taken into account is that he does not have a Master’s class.

Unlike the other elites, he uses an advanced class (Bishop), which tells us that he was too powerful to be part of the ten elites despite not having so much skill.

Unfortunately, like the rest of the elites, Gloucester was eliminated during the war of heroes. His weapon of choice (the Thyrsus) was imprisoned by the Adrestian empire.

In the final chapter of the route of the verdant wind, we fight against him because he is revived using technology from Those Who Slither in the Dark. In this battle, we can use Lorenz, which allows the new generation of ten elites to prove their worth as the new heroes.

Why Should I Care about Lorenz? 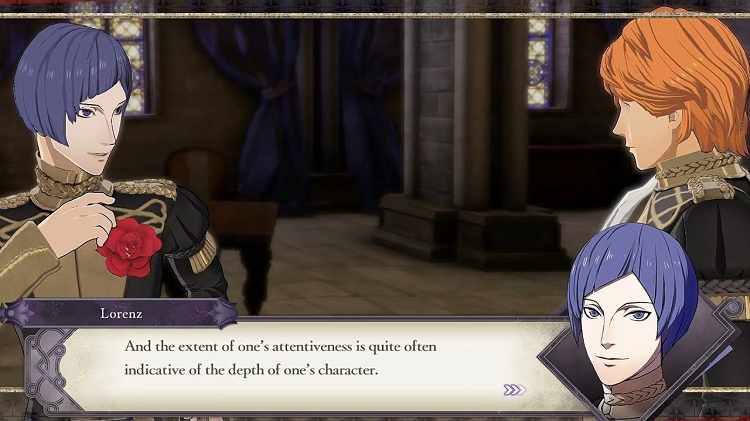 Well… Lorenz is a pretty good mixed unit. He is both a physical and magical attacker. The use of reason attacks and lance attacks makes him a perfect candidate to become a Dark Knight or a Bishop. And because of that, he is a pretty good unit in that field.

Lorenz is the perfect mix of physical and magical attacks. This allows you to put him at the forefront of the attack without much trouble. It also allows him to gain experience quickly. And therefore becomes an expert unit in a relatively short time.

In addition to that, his Distinguished House passive skill increases his damage regardless of whether it is physical or magical. This translates into a perfect mixed attacker. This can also play against him; since he can’t depend only on one statistic, he can be a little weaker than those who specialize.

One of the few points in Lorenz’s favor is the fact that due to his noble house, he has access to Thyrsus. Even without the Magic to instantly slay enemies, Thyrsus gives its wielder unmatched utility to start any combat without an issue. Most enemy units will be unable to counterattack at range 4. They will then be easy to finish off with another unit.

Ideally, he should be prepared with dark magic attacks as his primary weapon. His spear skills can serve as a backup in case he has some kind of problem or needs to make a direct confrontation with an enemy in the field.

You would recruit him until the end of chapter 16, and by that time, many of your characters will already be too good to want to replace him.

As far as his affinities are concerned, the possible ones are:

None of them are exciting, and since the only one with s-support is the female Byleth, there really isn’t much to say in that section.

How to Transform Lorenz Into a Pretty Good Dark Knight? 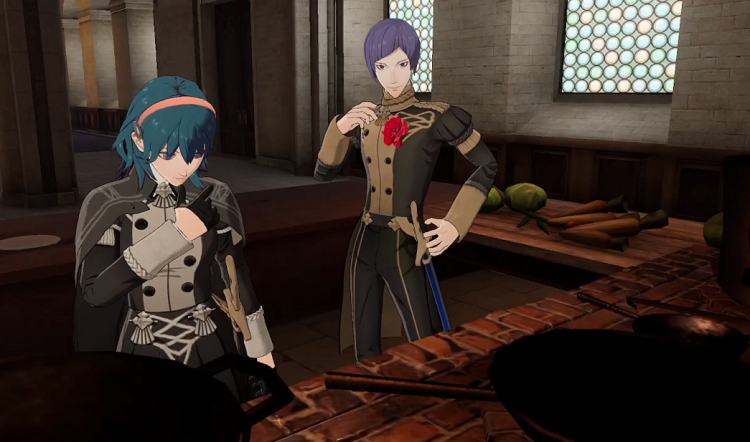 Mainly, all you have to do is play with him, and his skill level will go up by itself. As mentioned before, make his efficiency with dark magic and the spear go up as much as possible (ideally up to S rank).

Other than that, there is really no actual build. Because of how simple Lorenz is, the character really levels up on his own; you don’t need to use any unique strategy to get the best build. Plus, most of his abilities come with him as a base. He is a relatively simple character to play.

The Abilities of Lorenz’s Dark Knight

Once he becomes a dark knight, he gets:

How to Play Lorenz Dark Knight?

The final build for Lorenz will look something like this:

As you can see, it is instead a balanced class. Its main strength is the variety of attacks it offers, based on a mix of magical and physical attacks. It really is a balanced character.

It is designed to fight directly, so it can perform ideally fighting on the army’s front lines.

What Happens if I don’t Choose Lorenz for My Team?

Lorenz can be recruited directly during the Golden deer route (Verdant wind). In the rest of the routes, two things can happen:

How to Defeat Lorenz as a Boss

You will face Lorenz in three specific moments of the game:

During the first and seventh chapters in a simulated fight. Lorenz is not really a problem in these battles because his class (Noble and Cavalier, respectively) is not fully developed. Besides being simulated fights, he will not use his full potential, but he will also hold back.

The easiest way to defeat him in such fights is to use only one unit with axes. His defense is relatively low, and he only uses silver spears. This leaves Lorenz in such battles at a complete disadvantage when fighting directly. In addition, he does not have any type of magic or ranged attack, so any unit with high defense and high attack will trounce him.

The third time you fight him (during the great bridge coup), things change radically. First of all, here are the stats for that occasion:

Lorenz as an enemy class is basically the best version of his build. Instead of being a mixed magic-physical class, it becomes a purely physical class. Also, it can be a problem for most classes because it will have battalions of empire-armed infantry and imperial guards due to its great authority.

The only good thing about this battle is that you have two advantages:

Being a unit with low resistance (only 19 points), the best strategy to eliminate him is to attack him from afar with a magic unit. Preferably using wind or fire magic.

You will be able to lower his maximum HP in approximately three turns if your unit has enough magic level, and it will also allow you to attack him from a distance. Another alternative is to eliminate him using archers. The important thing is to avoid direct confrontation.

An unorthodox strategy is also to attack using axes. Lorenz is still a spear-wielding paladin, making him a perfect target for your axemen. However, I don’t recommend it because he has higher physical defense and can stop your axeman pretty easy if you are not careful enough. 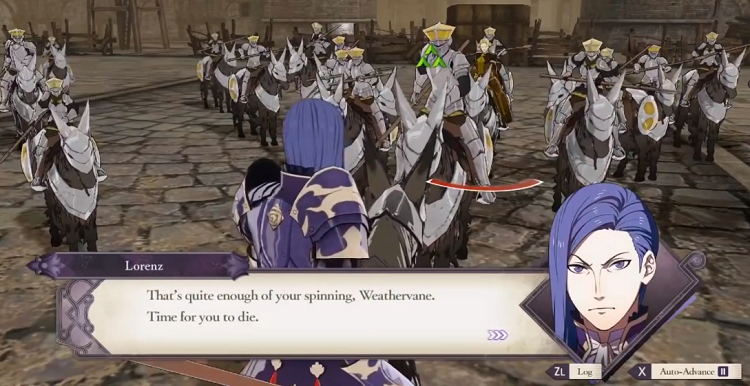 In the case of the favorite meal list is:

And his lost items are:

The Best Way to Level up Lorenz 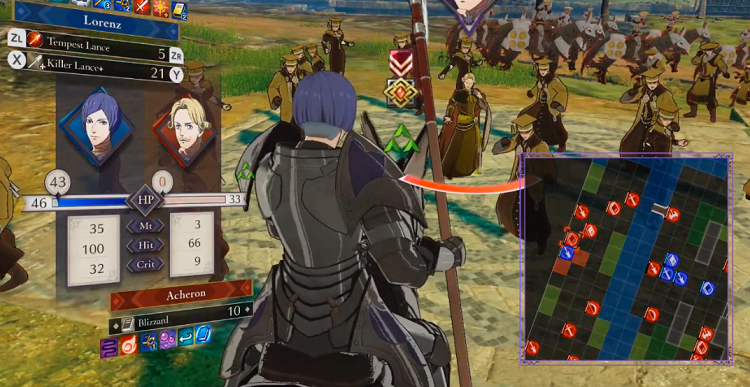 Just play with him. You can use skirmishes and hours of classes to increase Lorenz’s efficiency with different weapons. However, being a character closer to the physical part, there is no problem in leveling up weaknesses.

Likewise, if you are afraid of losing it, you can use dual attacks. It is unnecessary, but it is an excellent alternative to getting stronger.

Question: What is the Best Class for Lorenz?

Answer: As we explained in the article. The best is to make Lorenz a dark knight or a bishop. You can also try classes like a dark bishop or black mage, but the main thing is that it is a class with mixed-use (physical magic).

Question: Which House does Lorenz Belong to?

Answer: To the Golden Deers’ house, but you can add him to any house if you get enough charisma.

Answer: He can get married only to female Byleth.

Lorenz is a character that isn’t to my taste and doesn’t stand out much. Unfortunately, he will remain like many fire emblem characters who failed to find a connection with the majority of the audience. Despite that, I could actually consider him good enough to be part of your team within his own game.

With mixed-use (and if you can handle his heavy personality), you’ll have a character in your army that will be useful overall. More than ideal for any game in which you want to be part of the golden deer. Other than that, he really isn’t that good of a unit.